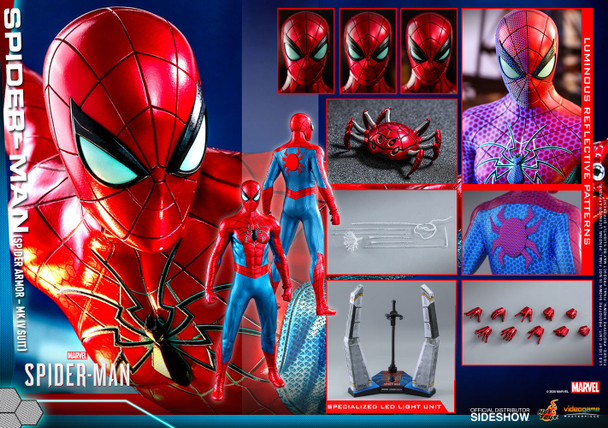 Collectible Like New Condition is a figure that was displayed in a retail setting only behind glass.

Developed by Peter Parker at Parker Industries, the Spider Armor - MK IV Suit is a high-tech variation of the classic red and blue costume with a distinct glowing spider insignia. Made of metallic liquid nano-technology, the advanced armor is capable of absorbing all damages, which renders Spider-Man completely impervious to harm in the critically-acclaimed video game Marvel’s Spider-Man.

The Spider Armor - MK IV Suit will turn you into a strong contender against every foe Spidey has ever faced.

WHAT'S IN THE BOX?

MSRP:
Now: $64.99
Was:
You are purchasing a CGC 9.8 Black Widow #4 Skan Knullified Variant. This is a Skan cover, Black Widow #44. "Knullified" variant cover. Please let us know if you have any questions! A Kelly Thompson...

MSRP:
Now: $69.99
Was:
These ARE the droids you are looking for!   You are purchasing a JMD Retail Exclusive officially licensed Loungefly Star Wars R2D2 and C3PO Faux Leather Mini Backpack. Printed...