Free Shipping on orders over $150. Some exclusions apply.

week. I started working at the shop about two years ago now and my first order of business was

to catch up on all the indie titles I haven’t read yet. Soon after Mike had said that Gideon Falls

couple issues. It has been almost exactly two years and I have finally read Gideon Falls, and I am

furious I did not read it sooner.

masterclass work of artist Andrea Sorrentino. Sorrentino is a seasoned artist at this point in the

“Old Man Logan” and “Joker: Killer Smile” most recently. Lemire and Sorrentino work on the

same frequency because all of their work together is top tier for the comic book medium.

ends. One is the psychiatric patient Norton, obsessed with collecting and cataloguing seemingly

random pieces of trash. The other is Father Wilfred, a washed-up priest recently charged with

leading the church of a small town. Both men find themselves entangled with the mystery of

the Black Barn, a mysterious shack that hangs on the edge of human perception and lures its

Lemire is known for his propensity to work a narrative around a small town or a single outsider,

which can be seen in his Dark Horse book “Black Hammer”. Lemire is also known for his work in

the mystery and suspense genre, having worked with similar tropes in books like “Essex

County”, “The Question”, and “Sweet Tooth”. Gideon Falls is I think the best example of his

mastery of the suspense and horror genre for comics. Lemire definitely understands the

the Black Barn, and Sorrentino works the page to highlight the childhood horror of the things

that lurk beyond the dark. Sorrentino additionally works with the panel layout of the book to

emphasize certain small moments or details that a character might notice, and even changes

the realm of regular perception. I think that some of Sorrentino’s best work comes out of this

book though due to the level of freedom the story provides. 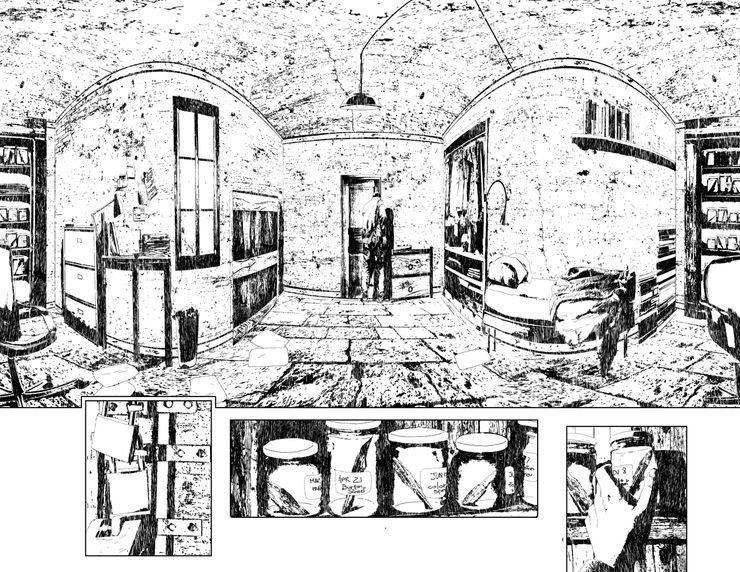 Gideon Falls should be a book that every horror fan reads. I can’t remember the last time a

comic gave me a shiver down my spine like this did. I recommend Gideon Falls for any fans of

his previous works at Marvel or DC who haven’t branched out into the other publishers yet, but

I also recommend this for any horror fans looking for a book to get obsessed with.

Gideon Falls can be found in trade paperback and in single issues at Comic Spot.

The lives of a reclusive young man obsessed with a conspiracy in the city's trash, and a washed-up Catholic priest arriving in a small town full of dark secrets, become intertwined around the mysterious legend of The Black Barn, an otherworldly building that is alleged to have appeared in both the city and the small town, throughout history, bringing death and madness in its wake. Rural mystery and urban horror collide in this character-driven meditation on obsession, mental illness, and faith.